Be the kind of girl who fixes another girl’s crown, without telling the world it was crooked in the first place. 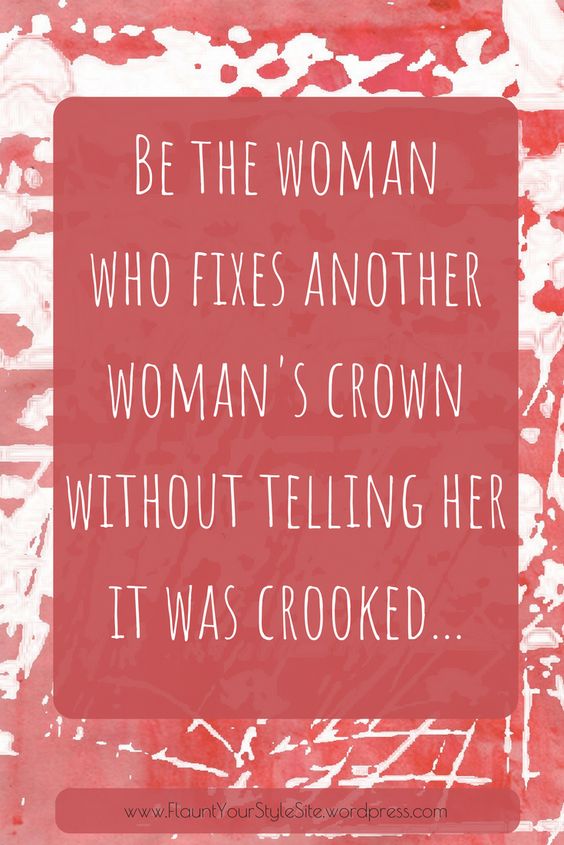 In an overly sensitive modern world where you can project your thoughts/words in countless ways, it’s important to watch what you put out there. It’s not important because people are offended if the wind blows wrong but because we are meant to build each other up. Mental health, self love, random acts of kindness… whatever you call it. Hello, just be nice.

Girls are their own worst enemy. Always comparing ourselves to one another, judging who’s wearing what, doing what with who… maaaaybe it’s none of our business. We all have flaws, and Lord knows we have the most unique bodies. What looks modest on a size 5 A cup looks promiscuous on me, who’s to judge who wore it best? Have you ever noticed that one girl can do something we turn our noses up at, but if our best friend who we love so so much does it we can justify it or at least turn a cheek? I’m not saying that all of a sudden her actions are okay, but maybe if we loved everyone like our best friend we would have less drama llamas.

I highly doubt any one’s day has gone south from a compliment, yet they seem so far and few between. Granted it’s easy to compliment a dress, necklace or pair of shoes. Don’t get me wrong those compliments will make you smile, but what about something that is specific to that person? Have you ever been complimented on your skin, hair, eyes, etc? Yeah, that’s you. You grew that, no one else has that. Go you. We hardly hear those compliments though, so at the risk of being obnoxiously cliche… start the trend. Tell someone something positive they might not have heard about themselves. Hello, just be nice.

Pleasant words are like honeycomb, Sweetness to the soul and health to the bones. Proverbs 16:24 NKJV

I’ve never had many girl friends, always been one of the guys. [insert sausage fest jokes that I’ve never heard before] With that being said, this past few months I’ve seen the power of sisterhood at work. Girls are catty, vindictive, judgmental, I mean there’s literally a movie called Mean Girls. BUT, they don’t have to be. Be the fellow drunk girl in the bathroom holding the random other drunk girl’s hair saying “You don’t need no man…you’re an independent woman”. I always thought “boys are less drama”. Actually it’s just that guys get mad and then GET OVER IT. Girls, hold on to it…forever. So I decided to put some pride away and start treating my girl friends like I treat my guy friends, minus some profanity. So far, so good.

Every girl knows what it’s like to be on the receiving end of a drama llama, so don’t be her. Hello, just be nice.

This site uses Akismet to reduce spam. Learn how your comment data is processed.